Skip to main content
© Rod Long/Unsplash.com
11 percent of the world’s population are hungry

More than 800 million people — 11 percent of the world’s population — are hungry. The World Health Organisation blames conflict and climate-related shocks for recent spikes in malnutrition and food insecurity. But thanks to the Green Revolution, fewer people go hungry today than in the 1970s, even though there are almost twice as many people on earth.

However, we need to produce even more food to satisfy growing demand. Every single day, an additional 225,000 people take a seat at the dinner table. And every single day, almost 500,000 people join the global middle class, where their diets include more meat and milk products that require more natural resources to produce.

An even greater challenge is increasing access to food: most people are hungry because they do not have the physical or economic means to procure food. We must not destroy the livelihoods of the two billion people who depend on smallholder farming. And we cannot further degrade the environment — especially as climatic changes impact how we grow essential crops.

Food insecurity is clearly a challenge to health and livelihoods. It can also destabilise communities, drive displacement, and undermine governments — and thus is a looming threat to national, regional, and global stability.

Arable land is a valuable natural resource. Since 2000, large-scale land acquisitions — also known as land grabs — have surged. Private sector or government investors buy or lease large tracts of land from developing-country governments that claim ownership — even though the land may have been used by local groups, sometimes for centuries. The deals deprive indigenous populations, local farmers, and pastoralists of their livelihoods while the land is converted to produce export crops.

About 80 percent of the Cambodian population lives in rural areas and depends on agriculture. In the 1990s, the government opened up the Cambodian economy and offered large tracts of land to private sector investors, taking it away from smallholder farmers who lacked legal documentation of their land tenure rights and spurring major deforestation in some areas.

Across the country, Cambodians have protested these deals, which have affected almost 800,000 people since 2000. State authorities have violently repressed the protests and, in some cases, people have been murdered or illegally imprisoned. In 2014, Cambodian citizens filed a complaint with the International Criminal Court alleging that the ruling elite committed crimes against humanity. The court announced in September 2016 that it would give special consideration to crimes of environmental destruction and illegal dispossession of land, which could bolster the Cambodians’ case.

Not only have we failed to eliminate hunger, we have also degraded the ecosystems that are critical for food security.

Impacts of food waste: Much of the food we produce — with a huge impact on the environment — is never consumed.

How to ensure food security in times of climate change 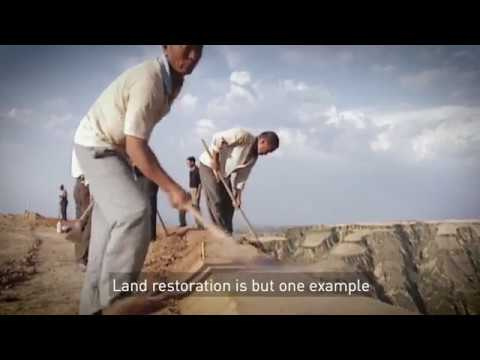 VIDEO: How to ensure food security in times of climate change

In this video, experts discuss the role climate change plays as a conflict multiplier. Key aspects include shocks in food production and the disintegration of livelihood systems, putting increased pressure on local populations that are dependent on agricultural activities. Land restoration, climate change mitigation and early warning systems can be supported by effective global governance for curtailing climate-related risks to peace.

© Radiokafka/Shutterstock.com
India, 2012: Vegetable seller reads a newspaper and waits for customers on the old city market.

In 2010, southwestern Russia was struck by its most severe drought in 130 years, leading heat waves and fires to destroy grain harvests. To control domestic prices, the Russian government banned exports, causing global grain prices to spike. The price hikes spurred protests in countries that depend on cereal imports, disrupting political regimes across the Middle East and Northern Africa.

In Egypt, a combination of import dependence, poverty, and long-standing socio-economic and political discontent formed a perfect storm. Egypt is the world’s largest wheat importer, buying 60 percent of its national grain consumption from other countries. When the 2010 drought struck Russia, the country was Egypt’s most important supplier of grain.

Soaring food prices — increasing almost 20 percent in a single year — had devastating effects on Egyptian households, which spend up to 50 percent of their income on food. The government spent 8 percent of its GDP on bread subsidies in 2010 - 2011, but even this enormous expenditure could not alleviate bread shortages. Due to mismanagement and corruption, the subsidies failed to help the poorest people and prompted a brisk black market trade. The shortages ignited deep-rooted discontent with the Egyptian government and, during the Arab Spring of early 2011, millions of Egyptians took to the streets to voice their frustration and call for bread, freedom, and social justice.

How can we feed the world?

New technologies and better agricultural practices could help significantly increase productivity within environmental limits. But to align business incentives with the public good, we will need government interventions.

Smallholder farmers are often marginalised and highly vulnerable to climate change. Governments can help farmers secure their land, avoid unfair trade practices, buy fertilizers and other inputs, and access services and markets. In addition, national and international policies should incentivise farmers’ efforts to protect and restore the environment and to prepare for disasters.

Strengthening links between rural and urban areas can both increase urban food security and give rural people access to urban services without pushing farmers to move to the cities.

Climate change will make food supplies and prices more volatile. We need to develop better ways to predict and manage this volatility. In addition, we should seek to improve the resilience of countries that depend on food imports, and develop contingency plans to manage global risks and prepare for a major disruption.

Severe droughts in the Indian state of Maharashtra have driven hundreds of farmers to suicide because they were unable to sustain their families or pay their debts. The region’s cash crops, such as soybeans or cotton, require significant inputs of fertiliser and pesticides that farmers must go into debt to obtain.

The increasingly variable climate increases the risks that they will lose their crops and default on these debts. To increase resilience to adverse climate conditions and improve food security, the non-profit Swayam Shikshan Prayog helped more than 20,000 women farmers and their families adopt a climate-resilient agro-ecological farming model that puts their nutritional needs first.

The women switched to more sustainable methods of water and fertiliser management and grew crops for their families to consume, selling only the surplus. The initiative — which integrated nutrition, sustainable agriculture, and gender aspects — helped make women and their families more resilient during droughts. By acknowledging the crucial role women play in sustaining their families, the initiative improved food security, soil fertility, agro-biodiversity, and incomes.