Skip to main content
© JUNTAWONSUP-UNEP/Still Pictures
If not reconciled, competing interests can cause water disputes

© Andrew J Billington/Shutterstock.com
Chile: Hydropower is clean energy, but can have undesired social and environmental impacts.

Water is indispensable: humans must have water to live. It is also essential for the environment and the economy. Less than one percent of the Earth’s water supply is fresh water available for human use, and it is unevenly distributed. Households, agriculture, industry, electricity, and the Earth’s ecosystems all need an adequate quantity and acceptable quality of water — and they need it at the right time.

For thousands of years, people have competed with each other and with nature itself for the Earth‘s scarce water resources. If these competing interests are not reconciled, competition for water can cause disputes and even violent conflicts. The word ‘rival’ is derived from ‘rivalis’, the Latin word for those who use the same stream as a source of water.

© AdeleD/Shutterstock.com
Automatic irrigation system on an agricultural farm in South Africa: Irrigation agriculture is by far the greatest consumer of freshwater worldwide.

Water flows, whether in rivers or underground. Therefore, the impacts of water use and water pollution can spread to distant places and across national borders. Conflicts over water use can arise not only at a local level, but also between regions and countries.

Climate change will strongly impact the water cycle. Decreasing rainfall and higher temperatures will reduce water supplies in many arid regions just as their populations are growing rapidly, increasing demand for water. Moreover, climate change is expected to increase the frequency and severity of extreme water events like droughts and floods. It can also degrade water quality; for example, as sea levels rise, saltwater could intrude into coastal aquifers, or toxins could concentrate in drying rivers.

© Giulio Napolitano/FAO
A woman drinking water collected from a well. Around one third of the global population does not have access to safely managed water sources.

Water is a matter of life and death

Clean drinking water is essential for life — and vital for health and hygiene. If people do not have clean water or sanitation facilities, contaminated drinking water and poor hygiene can spread disease. Common illnesses transmitted by water include diarrhoea and Guinea worm disease.

Although access to water and sanitation services has improved, as of 2015 nearly 844 million people still do not have a safe source of drinking water and more than 2.3 billion people lack basic sanitation facilities.

But despite these gaps, water is often wasted or used inefficiently. Growing water-intensive foods, producing beverages, or irrigating lawns strains water supplies, especially in dry regions like the Mediterranean or southern Africa. Often, people in industrialised countries do not realise that consumer products like coffee, a t-shirt, or a steak have a huge water footprint.

© adelphi, based on data from WHO 2017
© Panteleev Aleksey/Shutterstock.com
United Arab Emirates, 2015: Dubai Fountain—the world’s largest choreographed fountain system—is located in the highly water-stressed Persian Gulf region.
© Luiz Ferreira/Shutterstock.com
Brazil, 2016: Droughts do not only limit crop production, but can also substantially reduce hydropower generation. Brazil has been suffering from water scarcity over the past years, leading to severe hydropower shortages.

Will water spur conflict or lead to cooperation?

More than 280 river basins worldwide are shared by two or more countries, often leading to disputes between upstream and downstream countries. Climate change will increase the pressure on scarce water supplies in many basins. Yet, despite the alarmism sometimes embraced by politicians and the media, these disputes are not likely to lead to ‘water wars’.

Of the almost 2,000 incidents that took place in transboundary basins between 1990 and 2008, approximately twice as many events were cooperative than conflictual. The circles illustrate the total number of hostile events (not the degree of hostility). Conflict can become dangerous when external events overwhelm institutional coping mechanisms. The map’s hotspots coincide with regions that lack resilient ways to resolve conflicts.

The Ilisu Dam on the Tigris River, which is expected to be completed in the near future, is predicted to displace an estimated 80,000 people and submerge the 12,000-year old settlement of Hasankeyf. Along with the other 21 dams that form the Southeastern Anatolia Project, it will allow upstream Turkey to control downstream flows to Iraq. Moreover, irrigation enabled by the project will likely reduce the amount of water flowing downstream, increasing the potential for conflict in and with Iraq, and imperilling the already fragile Mesopotamian marshes in southern Iraq.

In 2016, Tajikistan began construction of the Rogun Dam on a tributary of the Amu Darya River. If completed, the dam would be the tallest in the world and would help alleviate the country’s energy shortages. However, downstream Uzbekistan has long opposed the dam, fearing it may reduce the country’s water for irrigation. Relations between Tajikistan and Uzbekistan improved after a new Uzbek president, Shavkat Mirziyoyev, assumed power, improving bilateral relations and indicating that Uzbekistan would not necessarily oppose the dam anymore.

Begun in 2016, Laos’ large Don Sahong dam project, one of 11 dam projects along the lower Mekong River’s main stem, will sell hydropower to its energy-hungry neighbour Thailand. But downstream Cambodia and Vietnam, as well as civil society organisations, fear that the project could endanger the unique ecosystem and biodiversity of the Mekong Basin, threaten the livelihoods of millions of fishers, and contribute to food insecurity.

Used with permission of Popular Science Copyright © 2017. All rights reserved. Map is reproduced and based on the Transboundary Freshwater Dispute Database by the Department of Geosciences, Oregon State University.

Can water be a pathway to peace?

However, the construction of upstream dams often fuels conflict with downstream users. While such conflicts are very unlikely to escalate into wars between nations, they can obstruct mutually beneficial cooperation in other sectors, hurting people and ecosystems, hampering economic development, and hindering sustainable and equitable water use.

Yet collaborative water management can help overcome distrust and create bonds between hostile groups. In the Orange-Senqu River Basin, for example, the Lesotho Highlands Water Project creates benefits for both upstream Lesotho and downstream South Africa. A series of tunnels and dams has increased the water supply to Gauteng, the water-scarce economic centre of South Africa. At the same time, the project generates important revenues and electricity for Lesotho, which is poorer and resource-scarce.

© Grafik_zfk/Pixabay.com
A section of the Nile River in Egypt

The Nile River: Conflict and cooperation in a contested basin

The Nile Basin has given birth to some of the world’s richest civilizations, and its history epitomises the critical role water plays in conflict and cooperation. Over the past few decades, violent conflict has led to countless casualties from brutal civil wars in basin countries, including (South) Sudan, Ethiopia, Uganda, Rwanda, Burundi, and the Democratic Republic of the Congo. Neighbouring countries accused each other of supporting rebel groups and even engaged in proxy wars.

Today, while tensions have eased and most of the basin countries view the Nile as a focal point for cooperation, upstream development is altering the river’s traditional balance of power. With rights to most of the Nile’s water, downstream Egypt was the dominant force in the last century. But as upstream countries experience economic growth and political consolidation, the rise of international infrastructure financing has allowed them to launch ambitious water infrastructure projects to meet their growing demands for energy and food. Egypt opposes these changes — not only because it depends on the river far more than any other basin nation. Accepting upstream control over water flows also challenges the country’s power and requires recognising its dependence on others.

The Nile Basin Initiative, which was founded by nine of the ten basin countries in 1999, with backing from major donor institutions, has strengthened cooperation on the Nile. However, it has not achieved consensus: in 2007, negotiations came to a standstill, unable to resolve conflicts of interest between downstream Egypt and upstream countries, particularly Ethiopia. Mid-stream Sudan, traditionally allied with Egypt for cultural and contractual reasons, has tried to defuse the conflict. But these efforts are hampered by Egyptian fears that Sudan is realigning with upstream countries, further undermining Egypt’s position.

In 2015, trilateral negotiations between Egypt, Ethiopia, and Sudan over Ethiopia’s construction of the Grand Ethiopian Renaissance Dam led to a framework agreement that many observers hoped would gradually prepare the ground for a broader agreement uniting all of the basin countries. However, in late 2017 that result still seemed far from certain.

Conflicts over water in the Nile Basin 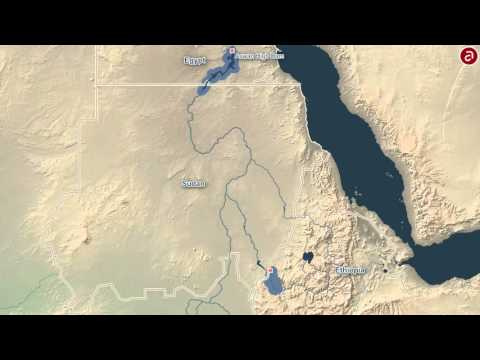 The Nile basin features significant conflict over access and rights to the Nile water resources among its eleven riparian countries. The Nile Basin Initiative (NBI), founded by 9 out of 10 riparian countries in 1999 with backing from major donor institutions, has achieved some successes in its attempts to strengthen cooperation. Yet, since 2007, diverging interests between upstream and downstream countries have brought the negotiations on a Comprehensive Framework Agreement (CFA) to a standstill, pitting Egypt (and to a lesser extent Sudan) against upstream riparians, especially Ethiopia. In 2015, trilateral negotiations between these three countries on a major dam under construction in Ethiopia led to a framework agreement that may in time prepare the ground for a broader agreement.